Never Give Up On Those You Love

Growing up, my grandmother had a saying that she liked to tell me:

“Never give up on those you love.”

She was my father’s mother, the second generation of my family to live a life in fear of domestic violence. You wouldn’t know it if you met her because she always had a smile on her face and a tray of freshly baked chocolate chip cookies to offer.

She was a hopeless romantic, which looking back, explains where I got it from. One of my favorite memories was us being on the couch, my head in her lap and her gently stoking my hair while watching classic romantic movies such as Casablanca and Breakfast at Tiffany’s. Her romance movies only served to prove her point: never give up on those you love.

She always dreamed of being in a love story and was over the moon when, at a the age of 11 years old, I told her that I had met my first girlfriend, Danielle. She had a feeling that we had met for a reason, and as our relationship progressed, was convinced that we were meant to be.

In the days leading to my forced departure from Florida, I went to her because I wanted to do something special for Danielle to show how much I loved her. She helped me pick out and paid for a heart pendant that broke in half. After some coaching on what to say, I made the promise to

Danielle that I would return for her one day.

She never met Danielle, but she loved her anyway. Grandma was my biggest supporter during the 8 years away from her, always quick to remind me that we never give up on those we love. She got excited at the idea of Danielle finding out what I did, saying it was the most romantic thing she had ever heard.

They never actually met because grandma passed right before I returned for Danielle, but before she died, she gave me one last pep talk. I had done something few men have ever done, according to her. She reminded me that we never forget our first love and that it would all come flooding back when she saw me again.

Grandma then asked me to make sure that Danielle didn’t become the fourth generation of women to go through what she did. Two weeks later, Danielle and I were standing face-to-face.

Grandma was right. It all came flooding back.

So with this book, I wanted to make sure her dream came true and put her in a love story. I’m sure she’s smiling down as we get this story published. She would be so proud of the way things turned out.

So never give up on those you love. You never know where it may lead you. 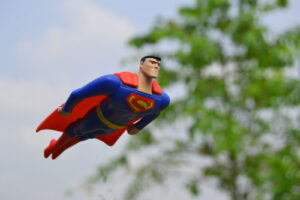